A tasty meat that drops from Reindeer

Used to chop down Candy Cane Logs without the destruction

A quick way to travel in the cold

Saddle used to ride Reindeer
(Can also be found in dungeons, and Christmas Presents)

A very important item needed for many other things and is made from Ice Shards which are found by mining normal Ice.

A magical gem that is needed for some magical items but first I recommend purifying it
first but it's not required.

A tool set that's better than stone but worse than Iron in some ways.
(Every recipe is just like every other tool just with Iced Stone)

A tool set that's better than iron but worse than diamond in some ways.
(Every recipe is just like every other tool just with Ice Ingots)

A tool set that's better than diamonds.
(Every recipe is just like every other tool just with Ice Crystals)

A magical wand that's capable of freezing a target for 3 seconds per shot.

A magical globe that is capable of controlling the weather.

Snow balls with rocks in them and have the same affect as snowballs except these hurt.

A decorative orb that can be put under trees. You can get any color by just replacing the dye.

A decorative block that you can put on leaves by Right-Clicking, and to retrieve them just right-click again with an empty hand.
(You can now put them on walls too!)

A nice decorated wooden door with a wreath on it!

It's soft and red! 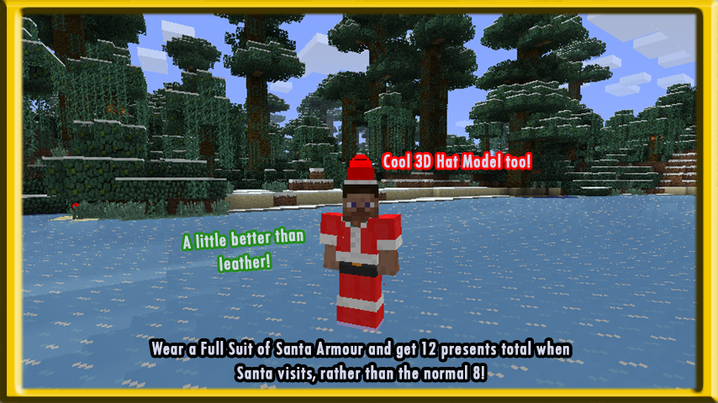 It's red and hold liquids.

A tasty treat that Santa wants but also deals a good amount of hunger.

A cold drink that tastes better every year!

A cold drink that tastes better when warmed!

A nice warm drink that gives a speed boost but is also Santa&amp;amp;#39;s favorite drink.

A crunchy cone that hold ice-cream.

A tasty sugary treat that goes well with Cocoa!

A tasty frozen treat that will give you special effect.

Gives you Fire Protection!
Powered by